Dzemal Emric was born 1958 in Sisak, Croatia. In 1968 his family moved to Pocitelj, a small picturesque town near Mostar, first mentioned in 1444. At that time the town had an art colony which was visited by artists from all around the world. They were drawn there by the beauty of the old town,  shaped like an amphitheater and built from the same stone that was its foundation. Dzemal spent most of his time watching painter--fascinated by the skill they used to portray the surrounding beauty, and at the same time he felt that they had missed something--something elusive and magical that could be felt only by someone who lived in that town and carried it in his heart. Dzemal became interested in painting at that time, and he spent hours watching the art of brush strokes and the mixing of colors and came to love the scent of palette and canvas.
Dzemal graduated from the Sarajevo Academy of Arts in 1983 and started working as a professor of Art in the Caplijiana High School. In 1987 Dzemal became a member of the Artists Association of Bosnia and Herzegovina and participated in several collective exhibitions. He had a few individual exhibitions in which he used his trademark painting style, demonstrating the world of textures from his imagination through the purely artistic correlation of colors. His common themes were problems of humanity and decaying substances.

The following is part of an introduction to the individual exhibition written by Margita Gavrilovic, the Art Historian: "It is a refreshing and unexpected fact that a young artist in his first individual exhibition presents to the public such artwork that is filled with the realistic truth in an almost metaphysical context. Such a spiritual maturity and commitment of Emric as a human is in the unbreakable connection with the artistic idea of the living substance and its inevitable end and the metaphysical state which is pessimistic by its very nature. However the correlation of colors shows to the observer a dynamic changing and decay of substance taking new forms and gaining almost molecular characteristics. Molecules are colors, colors are molecules. If the line is at all visible in these artworks it is there only to show the still existing substance or the part of it in its original, primary show the still existing substance or the part of it in its original, primary shape."
Dzemal worked as a professor until the war broke out in Bosnia and Herzegovina in 1992. He spent one year on the frontline and was captured and taken to a concentration camp in August 1993, where he spent two months. After his release he left for Germany with his family, where he lived for the next five years. After spending time recovering and adapting to a new environment Dzemal began painting on the theme of the concentration camp and war in general. In 1995 he became a member of the Berlin Artists Association and in the same year he exhibited a series of paintings on the theme of war. That was his first presentation to the German public. Dzemal found that working on that exhibition was therapeutic and liberating from all the anxiety and disgust that had grown within him during the previous couple of years. In 1996 he started the new period. He began painting on the theme of nostalgic memories of his home country, all the while retaining his recognizable form and style. He participated in both collective and individual exhibitions in Berlin in 1996, 1997 and 1998. His last European exhibition took place in Vienna, Austria. Around that time he also participated in his first collective exhibition on U.S soil which occurred in New London, Connecticut. Dzemal was critically acclaimed among more than one hundred artists who participated in this exhibition. Now in the U.S., Dzemal begins his life as well as his painting all over again for the third time in his life. He is planning to stay here because he feels he can live and create freely and productively in this cosmopolitan country, being a cosmopolitan person himself. 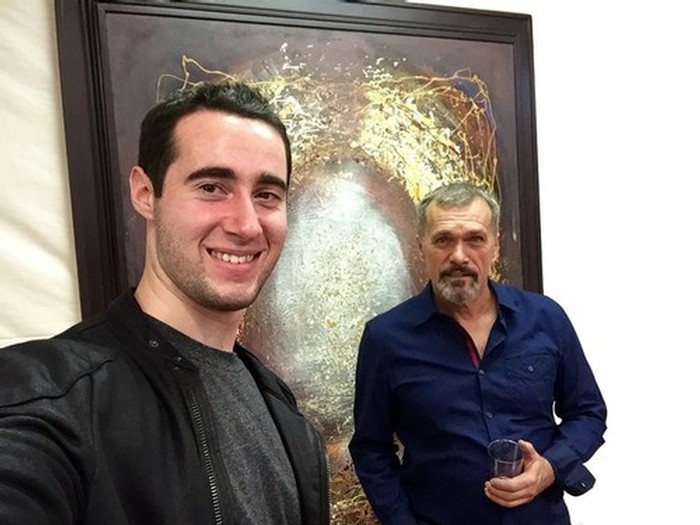